A fire alarm system is a combination of devices which helps to detect, alert and also prevent severe damages from fire, smoke or other emergencies. The system comprises of smoke and heat detectors which gets activated at times of smoke or fire, devices like siren, flash lights or voice evacuation message are used to alert people, and sprinklers, hose pipes and fire extinguishers are used to prevent such incidents.

We all know and understand the severeness of such disasters where people might lose their home and property earned by hard effort or even their loved ones in the worst case scenario. Statistics say that almost 2,500 fires were recorded in the Queensland state during last winter and almost 50 per cent of the residential fires began in the kitchen. Queensland Fire and Emergency Services says the latest figures on house fires show they have claimed 80 lives over the past five years. (http://www.abc.net.au/news/2014-10-16/statistics-reveal-deadly-side-to-house-fires/5818286). We are not sharing all this information to make someone fearful of such incidents but to know and understand how you can prevent such disasters. 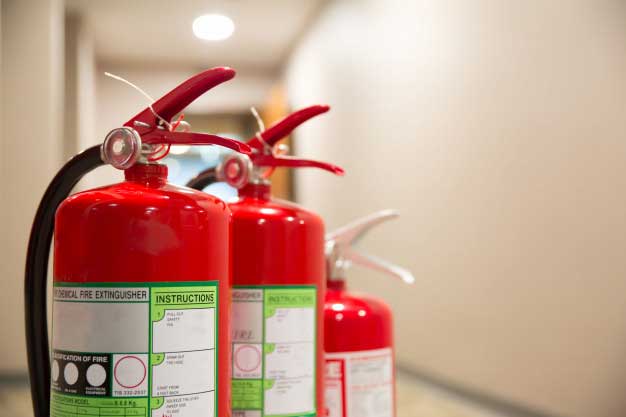 We at Al Alarms offer genuine fire and smoke protection solutions for a wide variety of applications, including domestic, commercial and industrial fire security systems as per your budget and requirements. We not only assist in the supply and installation of the fire protection systems, but also help in the testing and maintenance of the system. Moreover, we also make sure that our customers are confident enough to use the systems efficiently at the hour of need.

We provide a diverse range of products, including fire signs and stickers, fire safety panel, fire pumps and hose reels, sprinklers, extinguishers and blankets, and exit and emergency lighting and more. We also go through a thorough testing of your the entire system in accordance within the specific Australian Standards because Inspection and maintenance of fire protection systems is very crucial as it would make sure that all your equipment’s work well at the time of crisis. It is therefore always recommended to get the systems checked once in a while as it may help you maintain an efficient system in your home. Apart from fire/smoke system installation, Our team can help you in repairing, cleaning, testing and replacement of batteries in the systems.

A fire sprinkler system discharges water when it exceeds a predetermined temperature. It system consists of a two-part metal fusible link or a glass bulb with liquid and as the temperature exceeds, the bulb breaks allowing water to sprinkle.

Additionally, only the sprinklers at the fire affected area get working as each of them are independently activated by exceeding the set threshold, thereby maximizing the entire water pressure over the affected area. There are also different types of sprinkles available for residential and industrial usage.

A fire extinguisher is a portable fire protection device that can be used to put out small fires, often in emergency situations, however, It would very less effective on an out-of-control fire. It consists of a cylindrical pressure vessel containing a foamy substance which can be discharged to put out a fire.

There are mainly two types of smoke detectors; ionization and photoelectric.

An ionization smoke detector uses a radioisotope to detect the difference in air and generates the alarm. These are sensitive to the flaming stage of fire. 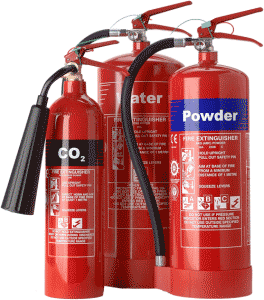 Photoelectric detector detects the intensity of light and triggers the alarm if it is below a set threshold, potentially due to smoke. It is more effective for detecting smoke from smoldering fires. 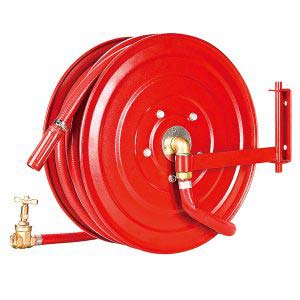 A fire hose is a high-pressure hose that carries water to combat a fire risk. It can be attached to a building’s plumbing system to get the supply of water.

There are various types of reels available as per your requirements which are designed to operate at different pressures. You can also control the direction and flow of water to the fire.

A fire blanket is a safety device made from woven fire glass material which is used to extinguish smothering fire. It can be used in homes and kitchens and is helpful for fires up to 900 degrees. It can be used along with fire extinguishers for home emergency purposes. 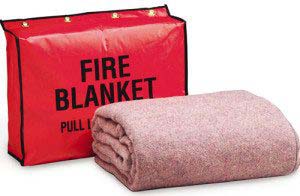 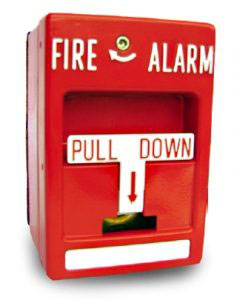 These manual system can be installed throughout the building, or just in corridors and stairs.

Audio video Indicators produce audible and visual indication during fire or gas emergency. It is designed to be used in conjunction with the fire alarm system and help to indicate people about the emergency. It is more often used in buildings and large commercial areas or complexes.

As per your budget and requirements, the AlAlarms team can guide you through many more fire safety devices like Sliding Fire Doors, Exit Doors, Fire Dampers, Fire Hydrants, Booster Pumps etc. 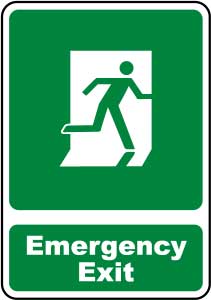 Contact us for a Free Quote or Request a Callback.